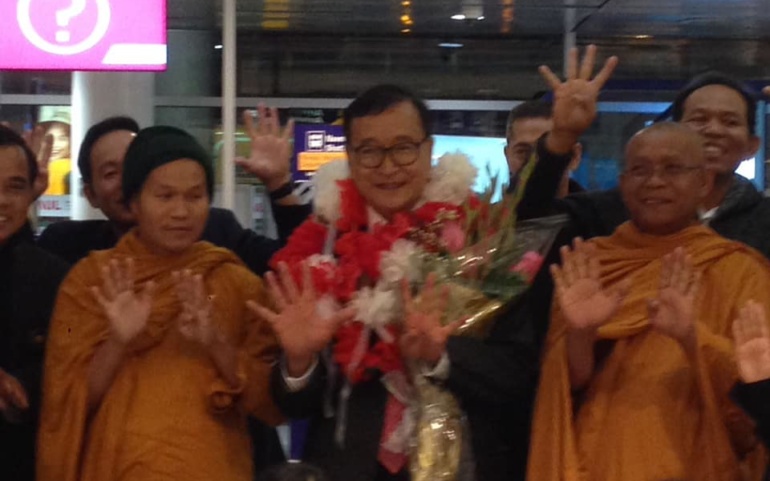 As the November 9 date of announced return from exile of CNRP leader and Member of the Honorary Presidency of the Nonviolent Radical Party, Transnational and Transparty, Sam Rainsy and other leading members of the Party is rapidly approaching, CNRP members are being arrested on a daily basis in the country. Anyone expressing support of the return of  Sam Rainsy will be arrested and charged as accomplices. Comments and posts on social media are also closely monitored. Prime Minister Hun Sen  has publicly announced that the armed forces will be deployed on November 9 when Mr. Sam Rainsy and other CNRP leaders living in exile return to Cambodia, accompanied by MEPs and other politicians from different countries.

Below a press release by Mu Sochua, CNRP Vice President

What’s new? Grassroots leaders , including youths of the Cambodia National Rescue Party, the main opposition party unconstitutionally dissolved by Hun Sen Courts are being arrested daily without court warrants by local police, detained and charged without any evidence and without legal representation. Furthermore, heavy surveillance of members of the opposition is conducted at every village throughout Cambodia spreading panic and an atmosphere of fear among the general population. Among the 38 CNRP elected commune chiefs and councilors being detained, 4 are women. Since January 2019. 147 have been charged and close to 100 questioned at police stations. In April, a CNRP member was found in prison with a broken neck after two days kept in police jail. Families are desperately seeking legal representation and must pay bribes to prison guards to visit their family members being incarcerated. Anyone expressing support of the return of Mr. Sam Rainsy will be arrested and charged as accomplices. Comments and posts on social media are also closely monitored.

What is the threat? HunSen went on a tirade when addressing high school students early this week. He publicly announced that the armed forces would be deployed on November 9 when Mr. Sam Rainsy and other CNRP leaders living in exile will return to Cambodia. Among those returning will be MEPs and other politicians from different countries. The armed forces will be used to arrest and take order from him as Sam Rainsy is leading a rebel group to topple the government. Mr. Sam Rainsy and other eight members of the CNRP Permanent Committee have been charged with treason and plotting a coup. Arrest warrants against the nine have been sent to ASEAN countries for immediate arrest and extradition.

What is latest international context? This is happening while a delegation of high ranking officials lead by Deputy Prime Minister just completed their visit to Germany to gather support for the EU Everything But Arms initiative that provides employment for 700,000 factory workers, social support for their family members and sustains hundreds and thousands small businesses that cater to the facfor High level representatives of the Garment Manufacturers’ Association of Cambodia is currently in Brussels to discuss EBA.

Why it matters? The return of Mr. Sam Rainsy and other CNRP leaders and Cambodian living abroad is not a coup but a non-violent and peaceful solution for Cambodia to return to a democratic path. We must be allowed to return to our homeland as free citizens, to be with our families and our people, to speak freely with our friends and supporters, without fear of harassment, threat, persecution, imprisonment or bullets from machine guns. No one should be prosecuted for welcoming or joining our return.

What should be done? International guarantees for safe return of the exiled leaders to Cambodia are needed. To avoid threat of violence international representatives and media should join the exiled opposition leaders on their return. Cambodia’s partners should convince the regime that the Return is an opportunity to reset the current deadlock. The latest conditional proposals of CNRP Acting President Sam Rainsy should be seriously considered: first Kem Sokha and the political prisoners to be freed and that to be followed by a genuine internationally-monitored dialogue.