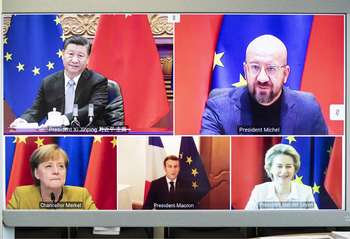 The EU and China concluded in principle the negotiations for a Comprehensive Agreement on Investment (CAI) at the cost of the rights of Chinese minorities.  This deal follows a call between Chinese President Xi Jinping and European Commission President von der Leyen, European Council President Charles Michel and German Chancellor Angela Merkel on behalf of the Presidency of the EU Council and French President Emmanuel Macron.

The deal aims primarily to expand access to the Chinese market for foreign investors in industries ranging from cars to telecommunications.

“This Agreement is of major economic significance and also binds the parties into a values-based investment relationship grounded in sustainable development principles,” the European Council andEuropean Commission said in a statement.

Growing criticism over allegations of forced labor in the region of Xinjiang, where rights groups say up to 2 million members of predominantly Muslim minority groups have been detained in “reeducation” camps, had threatened to complicate the deal.

The agreement will subsequently need the approval of the European Parliament, where some voices have expressed objections as a result of alleged human-rights violations in China.

On 17 december the European Parliament adopted a resolution on forced labour and the situation of the Uyghurs in the Xinjiang Uyghur Autonomous Region with 604 votes in favour, 20 against and 57 abstentions. The Parliament strongly condemned the Chinese government-led system of forced labour – in particular the exploitation of Uyghur, ethnic Kazakh and Kyrgyz, and other Muslim minority groups – in factories within and outside internment camps in the Xinjiang Uyghur Autonomous Region. It also denounced the continued transfer of forced labourers to other Chinese administrative divisions, and the fact that well-known European brands and companies have been benefiting from forced Chinese labour. It was of the opinion that the Comprehensive Agreement on Investment with China must include adequate commitments to respect international conventions against forced labour and considers, in particular, that China should therefore ratify ILO Conventions 29 and 105”.