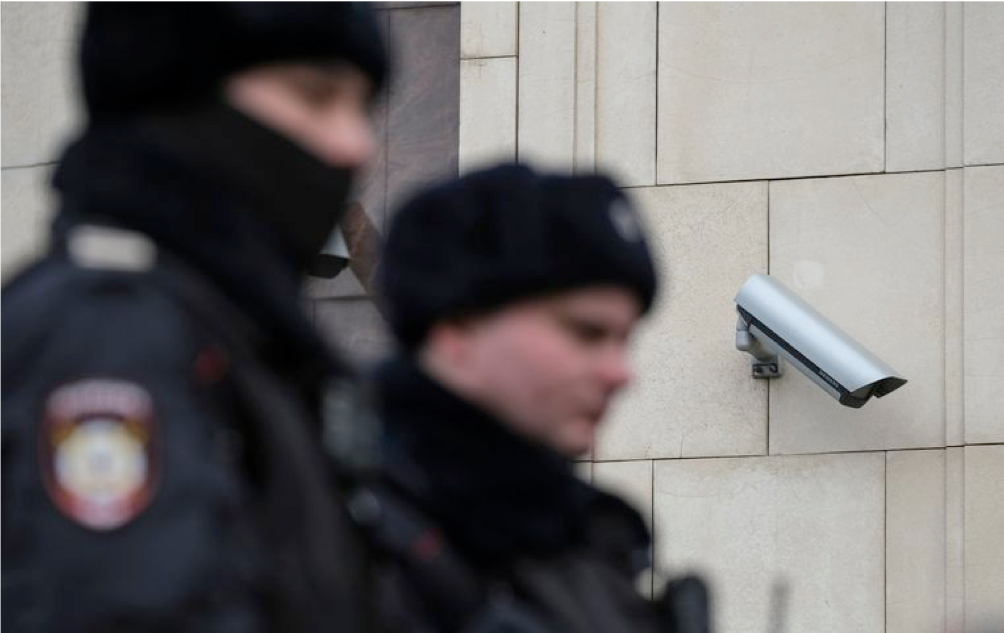 By Jarron Kamphorst in Trouw, March 16, 2020 – Moscow has recently become one of the largest biometric camera surveillance networks in the world. For safety reasons according to municipal authorities. Skeptics speak of yet another measure depriving Russians of their freedom.

The Sportivnaya metro station is one of the many historical metro stops in Moscow. Large marble pillars with green frills support a ceiling covered with engraved tiles, giving the station the allure of a classicist palace. Above ground, the station entrance resembles a Greek temple. Tourists take pictures there as locals move agitated between the visitors because apart from the pomp and circumstance, Sportivnaya is above all one of the many busy stops of the metropolitan underground. Tens of thousands of commuters take the metro to work every day.

That large number of travellers was precisely the reason why in 2018 the Moscow authorities designated Sportivnaya as a testing ground for one of the most advanced surveillance projects in the world. The hordes of travellers walking up and down the platforms day in and day out provided the ideal testing group for a brand new camera system that, according to Moscow mayor Sergei Sobjanin, will make the Russian capital many times safer.

But that security comes at a price. Moscow camera surveillance uses real-time biometric data. Security cameras are connected to a software system that feeds the live camera images to a database of the police and security services, and uses artificial intelligence to determine whether someone is suspicious or not. This allows the authorities to identify and track unsuspecting passers-by based on their appearance.

If you are a wanted criminal or terrorist, the algorithms catch on and a direct notification is sent to an app on the mobile phone of a police officer, who can take immediate action. Russian investigation work in 2020: fast, effective and accurate.

The city attaches great powers to the surveillance system. “Criminals will stay away from Moscow; there will be no place to hide for them anymore,” Mayor Sobjanin stated confidently last year. The Mayor casually added the ambition that the biometric camera system in the capital “will soon be one of the largest in the world”.

Turns out he was not bluffing. The new technology was so popular within city hall that Sobjanin recently decided to expand the surveillance network. In May 2019, the city announced that it would install facial recognition software for a value of $ 53 million on over 200.000 security cameras across the city.

And no time was wasted: at the beginning of this year, at least 105.000 cameras were already connected to the advanced software. Russian media RBC reported last month that the technology will soon be expanded: the software will also be able to recognise people based on tattoos, eye color, voice sound and way of walking. According to the authorities, ordinary citizens have nothing to fear as all this is constructed for the sole purpose of fighting crime.

But in a country where authorities generally do not care very much about individual freedoms and civil rights, concerns about the new security system are high. Human rights organisations hold their breath as they fear the images captured by the cameras will not only be used by the police and security services’ database, but will also be compared with virtually all available online information, with all possible abuse such may entail. The technology would thus transform public space into “virtual identity parades”.

The biometric surveillance system is just a smoke screen for yet another government measure to curtail civil liberties, says Alena Popova, a lawyer and activist, who filed a lawsuit against the Moscow technology department which administers the surveillance programme in January. “This is simply the most recent symptom of the ancient Russian tradition of wanting to control every aspect of life,” she says. “They sell it as something you cannot be against, because it reduces crime. And safety, of course, is paramount. But in the meantime, they are abusing the system at the expense of citizens’ privacy.”

Those evil intentions, Popova continues, were already apparent during last summer’s protests in Moscow, following the fraud in local elections. “The authorities used facial recognition to identify protesters. They admitted it themselves. Apparently attending a demonstration is reason enough for the authorities to swipe the biometric data through the online database and arrest people on the spot. It has been clear for a long time that this no longer concerns only serious criminals and terrorists. This is in direct violation of privacy and data protection laws.”

The alleged illegal use of the system and the privacy violations involved were grounds for Popova to go to court. Last week, the court ruled against her. According to the judge, the system does not violate the privacy of citizens and only serves to guarantee safety in busy areas. “This says it all,” Popova sighs. “This statement is the death blow to anonymity. Privacy no longer exists in Russia. This is yet another measure the Government is introducing to push its citizens into submission.”