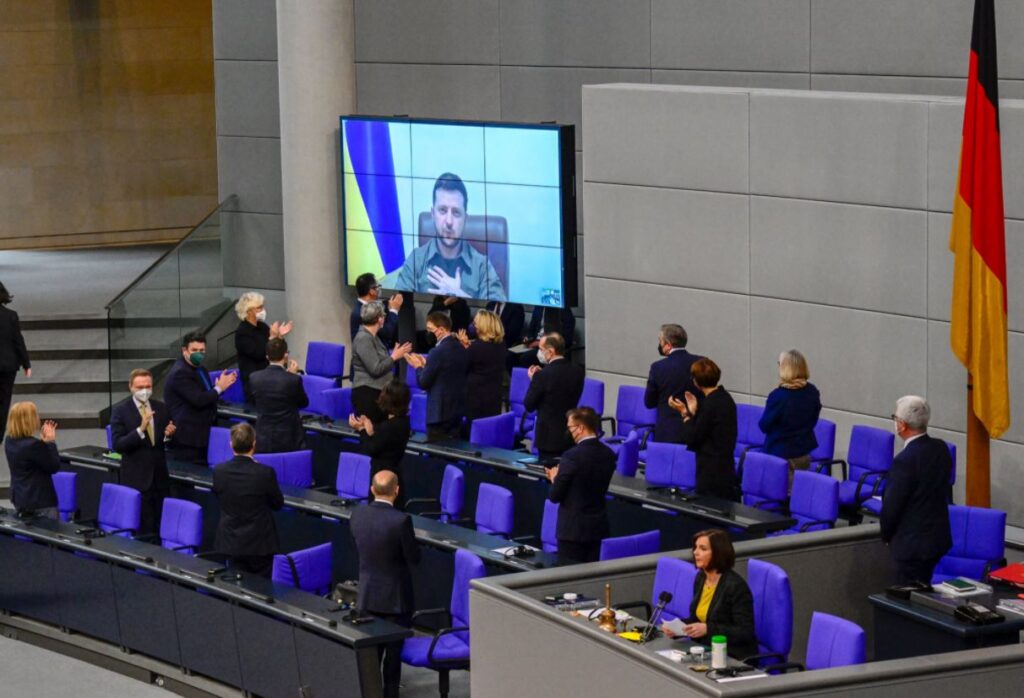 The President of the European Council, Charles Michel, had a meeting with the Prime Ministers of Poland, Slovenia and the Czech Republic. From the meeting emerged the need to “take further urgent measures for Ukraine” and “the extremely important role” played by “all EU countries”.

“There are 13 million people in Ukraine affected in various ways by the war, of which 2 million are displaced”. These are the words of the EU Commissioner for Home Affairs, Ylva Johansson, in the hearing at the European Parliament.

Berlin: Ukraine will not enter NATO

Answering a question about the NATO peace mission proposed by Poland, Steffen Hebestreit, spokesman of the German Chancellor Olaf Scholz, said that no military or NATO personnel should enter Ukraine.

Zelensky at the Bundestag: “With every bomb, a wall is raised with the EU”

Bundestag Vice-President Katrin Goering-Eckardt introduced Zelensky’s speech by emphasizing Germany’s support: “Putin has also attacked our peace order with this war”. Speaking in front of the German Parliament, Zelensky stated that “with every bomb that falls, an ever-stronger wall is raised between Ukraine and Europe. Hesitating on Ukraine’s entry into Europe is another stone in the wall. We perceive resistance, we perceive that you want economy, economy, economy. Chancellor Scholz, tear down this wall.”

Di Maio: Kiev ready for the agreement but Moscow shies away from it

As a guest on La7, Foreign Minister Di Maio said, “Our diplomatic action does not stop. We must bring Putin to accept an agreement. Russia invents reasons every time to escape a closure.” He added that, in the upcoming days, Draghi will demand a cap on gas prices from important government leaders. Defense Minister Guerini, in reference to NATO’s position, said: “Putin has miscalculated. I think it’s time to find a peaceful solution. A no-fly zone would be too risky. It could lead to an involvement of the Atlantic Alliance. The solution is: sanctions on one side and aid on the other.”

Circular from the Defense Staff: new rules for military training

The Ministry of Defense has issued a circular, redesigning the rules of the Army after Russia’s invasions of Ukraine: early leave granted with caution, personnel that can be employed without constraints and training activities “oriented to warfighting”.

France has offered consular protection to Marina Ovsyannikova, a Russian journalist who protested the war in Ukraine on Monday, March 14, during a Russian television broadcast. “We are Russians. Intelligent people. Only we have the power to stop this madness. Go to the protests. Don’t be afraid. They can’t put us all in jail.” These are the words of the journalist in reference to the declaration of illegality of the so-called “fake news” about the Russian armed forces.

Spain joins the initiative that aims to bring Russian President Vladimir Putin before the International Criminal Court in The Hague, as he is found responsible for “war crimes” carried out during the invasion of Ukraine. Foreign Minister Jose Manuel Albares said the Spanish government’s goal is to “ensure that Ukraine continues to live in peace.”

Zelensky: priority of the negotiations is the end of the war

After Zelensky’s words, Ukrainian chief negotiator Podoliak reiterates the rejections of the Swedish and Austrian model of neutrality proposed by Moscow. Ukraine has a desire for “absolute security guarantees” against Russia to be achieved with an “agreement whose signatories must commit to intervene alongside Kiev in case of aggression.” In an interview with CNN, the Ukrainian Foreign Minister stresses that both delegations, Russian and Ukrainian, “are far from reaching an agreement.” He also explains how some factors, such as the continuous “resistance of the Ukrainians” and “the sanctions imposed on Russia”, force Moscow to slightly change its position. Zelensky reaffirms that the priorities of the negotiations are the “end of the war, security guarantees, sovereignty, restoration of territorial integrity, real guarantees for our country, real protection for our country.”

A NATO “peace mission” has been requested by Poland to help Ukraine. “A mission that cannot be unarmed”, as communicated by the Polish Deputy Prime Minister Jaroslaw Kaczynski.

Demonstration in memory of the 1848 revolt ended with Russian repression

On Tuesday 15, in Budapest, thousands of people demonstrated to celebrate the beginning of the 1848 revolt against Habsburg rule, which ended with a brutal Russian repression. The theme of the invasion of Ukraine dominated, but the Hungarian Fidesz High Officials did not refer to it as a “war” as the opposition was asking for a choice between Europe and “the East”.

Preparations are beginning in Slovenia to receive Ukrainians in need of medical treatment. On Tuesday 15, Health Minister Poklukar announced that Slovenia supports Poland’s proposal to transfer Ukrainian patients to EU member states that do not border Ukraine.

Moussi (pdL) in the square against Saied

There were about two thousand people who demonstrated today in the streets of Tunis supporting the Free Democratic Party (PDL), led by the “pasionaria” Abir Moussi. The demonstrators denounced the “seizure of power” by President Saied and the economic crisis in which the country has plunged, stressing how poverty has increased and the fear of an imminent famine in the country.

A new shipwreck off the coast of Libya, a boat carrying Egyptians and Syrians capsized. There would be one dead and 19 missing and only three people rescued, said the Tobruk-based Foundation for Migrant Assistance and Humanitarian Services in Libya.

Drought, the Prime Minister launches an appeal for help

Mohamed Hussein Roble, Somalia’s prime minister, has launched an international appeal asking for help for the 6.9 million people who are suffering from hunger due to severe drought. Half a million people, he said, have fled their homes in search of food, but without concrete help they could die.

Nazanin Zaghari-Ratcliffe released, detained in the country since 2016

Nazanin Zaghari-Ratcliffe a British-Iranian citizen, has been released and is on her way back to Britain. The woman had been detained in Iran since 2016, for the first five years she served her sentence related to the charge of conspiracy against the Iranian government, but, soon after being released, in March 2021 she had been summoned by a court again and charged with participating in a protest against the government as many as 12 years earlier.

Lavrov: ready for negotiations with Kuleba with Turkish mediation

Yesterday, Lavrov received Turkish Minister Mevlut Cavusogli in Moscow, reiterating the willingness and usefulness of continuing negotiations with Ukraine at the level of foreign ministers under Turkish mediation. In addition, Lavrov, says that the meeting between Putin and Zelensky will only be with the possibility of a specific agreement, and it “must be a contact between the presidents to consolidate the agreements, which are being defined between the two delegations.”

Moscow: air defense systems for Ukraine would destabilize the situation

After Ukraine’s request to the U.S. Congress to provide air defense systems, the Russian Foreign Ministry said it would represent a destabilizing factor and would not bring peace to the country.

Marina Ovsyannikova, the journalist of the blitz at the Russian tv, fined and released

On Tuesday, the journalist broke into a news station showing a sign in which she incited to protest against the war. After the release of the video message she was fined and then released. Her lawyer stated that the police wanted to detain the journalist to “limit themselves to following administrative protocol, but the case was then taken over by the high authorities”.

The presidential elections of March 12 in Turkmenistan were won by Serdar Berdymukhamedov, son of the current president Gurbanguly Berdymukhamedov who has ruled the country since 2006. The elections were won with the 72.97% of the votes, without any competition, which is why the victory has been referred to as “dynastic succession”.

The UN High Commissioner for Human Rights has condemned the mass killings in Burma that have been perpetrated by the military since February 1, 2021 coup. The charges would be those of war crimes and crimes against humanity.

Covid: Hong Kong is affected by the most severe wave since the start of the pandemic

In the last two years, Hong Kong had managed to keep contagions under control, thanks to its “zero Covid” policy. In recent weeks, however, the omicron variant is putting a strain on the country, which finds itself in dire straits with huge pressure on hospitals, preventing people from being treated properly.

During a joint press conference with Lavrov in Moscow, Turkish Foreign Minister Cavusogli said, “ we urgently need a humanitarian ceasefire… The war must end.” Ankara’s first priority: evacuating its citizens from Ukrainian territory. About 15,000 Turkish citizens have already been evacuated. He also said that a phone call between Erdogan and Putin will take place. Lavrov said he appreciates “Ankara’s balanced approach” and that Turkey “has not followed the sanctions imposed by the US and other countries”. He also noted that the Russian goal is “to disarm Ukraine and cleanse it of fascist ideology.”

Following the U.S, G7 and EU countries’ statements, Prime Minister Kishida also said that in response to the invasion of Ukraine, Japan will revoke Russia’s Most Favored Nation (MFN) trade status, which gives it equal access to all WTO members’ markets and guarantees equal tariffs. Kishida called Russia’s invasion of Ukraine a “historic atrocity” and said Japan will expand the scope of asset freezes against Russian oligarchs, ban specific imports and cooperate with international aid agencies.

Ukraine: Republican leaders, “Zelensky said Biden must do more”      McConnell, the Senate Republican leader, cited Zelensky’s speech to the U.S. Congress saying that “the message to President Biden is that he needs to do more”, a position shared by many other Republicans. Pelosi, speaker of the House, thanked Zelensky for acknowledging aid from the United States and referred to his call for a no-fly zone, arguing that “if this can’t be done, there are other opportunities to help Ukraine.” He also newly condemned Russia’s attacks.

Elections, the left wins             On March 13, elections were held in Colombia, both for the renewal of Parliament and the primaries ahead of the presidential elections on May 29. The left wing won the parliamentary elections, an unexpected result for a traditionally conservative country. For the first time the left-wing coalition, which until now was in opposition, has obtained the majority in both the House and the Senate. As for the primaries, the most voted candidate was Gustavo Pedro from the center-left coalition, while former Medellìn mayor Federico Gutiérrez from the center-right coalition came in second.