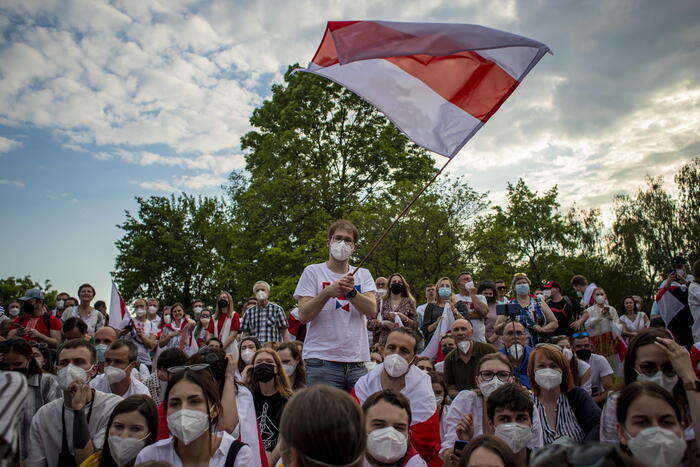 Von der Leyen – Russia: no to blackmail on gas, we are united

“Gazprom’s announcement is another attempt by Russia to blackmail us with gas. We are prepared for this scenario. We are mapping out our coordinated EU response. Europeans can have confidence that we are united and in solidarity with the affected member states”. Thus in a tweet European Commission President Von der Leyen, commenting on the announcement of the stop of Russian gas supplies to Poland and Bulgaria.

Mattarella at the Council of Europe: “peace is the result of patient collaboration between peoples”

“As much as war has the pretension of being lightning – and it does not succeed – so much peace is the fruit of the patient and unstoppable flow of the spirit and practice of collaboration between peoples, of the stability to move from confrontation and the arms race, to dialogue, control and balanced reduction of weapons of aggression”. These were the words of Sergio Mattarella during his speech to the Council of Europe. Mattarella was welcomed by Tini Kox, President of the Parliamentary Assembly of the Council of Europe and Marija Pejčinović, Secretary General.

Boris Johnson: Russia sanctions on our deputies are “a source of pride”

For the Conservative Prime Minister “British deputies who have been sanctioned by Moscow should consider it a source of pride”. This is what Johnson said responding to the question of one of the deputies to whom Moscow has banned the entry into Russia, as a reaction to the measures taken by the government in London for the conflict in Ukraine against 386 members of the Duma. According to the Guardian in the “black list” of the Russian Foreign Ministry there would be 287 names, of which 213 Tories, but also Nicholas Soames and Dominic Grieve, former deputies no longer in office since 2019.

Vigilant Commission for government response to Ukraine crisis on the way

Dublin will reportedly establish a new subcommittee to oversee the government’s response to the war in Ukraine. The body will be composed of senior officials and will address issues including the provision of housing and education for those arriving from Ukraine and potential economic relief for those hosting refugees in their homes. About 25,000 refugees have arrived in the country since the war began.

Macron after re-election: “We will respond to the country’s anger”

Macron’s encore at the Elysée after obtaining 18.7 million votes, 58.55% of those cast against Marine Le Pen’s 13.3 million. Great protagonist was the abstention: it was recorded the highest level for a ballot since 1969. Despite the defeat, the right-wing leader commented on the outcome as a “striking result”, pointing to the legislative in June. Macron, on the other hand, under the Eiffel Tower, said he was not the president of one party but “of all the French”.

The country will soon be able to give up Russian oil

After the Russian stop for gas supplies to Poland and Bulgaria, German Economy Minister Robert Habeck, said that “an embargo today has become manageable for Germany”. The German government has in fact reduced dependence on Moscow from 35% – before the war – to 12% today, identifying alternative supplies for the Leuna refinery. At the moment it is also working to find a solution for the other plant served by the Druzhba pipeline, that of Schwedt.

Volodymyr Zelensky stressed the risk of nuclear disaster after Moscow launched missiles near three nuclear power plants in the country in recent hours. “After what Russian troops did in Chernobyl and Zaporizhzhia, no one in the world can feel safe knowing how many nuclear weapons Russia has”, the Ukrainian president said. In the meantime it has been foiled by the Ukrainian air defense the risk of a missile attack from the Black Sea towards Lviv. This is what the governor of the city Maksym Kozytskyi stated on Twitter.

Awarded the UNESCO Prize for Freedom of the Press to AJB – Association of Journalists of Belarus – for saving local independent media from the repression carried out by President Lukashenko since his re-election in 2020, an election considered rigged by Westerners.

AJB, founded in 1995 and composed of about 1,300 people, fought to defend press freedom in Belarus but was forced to end its activities during the wave of repression that occurred last summer.

After Gazprom’s announcement on the stop of gas supplies to Poland and Bulgaria, the price of gas on European markets has soared. Moscow’s decision followed the refusal of the two countries to pay for gas in rubles at the end of the day on Tuesday. PGNiG, the Polish state oil company, on the one hand confirmed that the suspension of Russian gas will have no impact on deliveries to end customers; on the other, according to the Polish company, the Russian suspension of natural gas supplies constitutes “a violation of the Yamal contract”.

According to the emergency health services there are at least 80 victims in the country following the explosion of an illegal oil refinery. The event would have happened last friday in an illegal site between the states of Rivers and Imo, in the oil-rich south of the country. “We have recovered at least 80 charred and semi carbonized bodies at the site”, this was stated by Ifeanyi Nnaji of Nigeria’s National Emergency Management Service (Nema), who added that the death toll from the disaster could rise further.

Last year, the Tunisian authorities stopped 20,616 people attempting to reach Italy illegally. This was announced by the Director General of the Tunisian Coast Guard Department at the Ministry of Interior Walid Ben Ali during a meeting with local and international media to illustrate the activities of the ministry and improve relations with the press. Of those apprehended, 10,245 have Tunisian citizenship and 10,371 are foreigners, 90% of whom are from sub-Saharan Africa. On the other hand, the number of migrants apprehended since the beginning of the year through April 20 is 3,160, of which 2,249 are foreigners and 911 are Tunisians.

130 victims of mines in southern Tripoli since June 2020

Human Right Watch reports that some 130 victims, most of them civilians, have been killed by mines and unexploded ordnance in Libya since Khalifa Haftar’s armed forces ended their attempt to take over Tripoli in June 2020. The NGO urged the Libyan government and its international supporters to “intensify efforts to clear the area since children have also been killed”.

Moscow closes the taps to Bulgaria and Poland. Prices rise

Gazprom has made it known that Bulgaria and Poland will have to pay for the supply of hydrocarbons respecting the new procedure that foresees the use of the ruble. Since Wednesday morning, Russia has in fact closed the taps of the pipelines that bring its gas to Poland and Bulgaria. After the communication, gas prices have soared reaching 107 euros per megawatt hour, an increase of 17% compared to the previous day. After the stop to the two countries, Moscow has asked to close the taps to all “hostile countries”.

Xi sends message to Macron to congratulate him after re-election

Xi Jinping congratulated Emmanuel Macron after his re-election to the Elysée Palace. In his message, Xi said that “over the past five years, the comprehensive strategic partnership between the two countries has reached a high level of development under the leadership of the two heads of state”. The Chinese president also emphasized the excellent cooperation in dealing with the Covid-19 pandemic, improving multilateralism and global governance.

Ankara’s operation against Pkk in northern Iraq, defense minister: “we will close our borders to terrorists”

Turkish Defense Minister Hulusi Akar, speaking about the ongoing military operation against the Kurdish armed group Pkk in northern Iraq, near the border, says that it will be impossible for terrorists to enter Turkish territory. On April 18, a new phase of military operations began. The victims are currently 56 Kurdish militants and 4 Turkish soldiers.

Osman Kavala, a philanthropist and human rights activist accused of “attempting to overthrow the government” because of his support for anti-government protests in 2013 in Istanbul, has been sentenced to life in prison. Already in pre-trial detention for more than four years, the European Court of Human Rights had called for the activist’s release.

Aung San Suu Kyi was sentenced to five years imprisonment for corruption. The charge is that of accepting a bribe of 600,000 in cash and gold bars. The sentence is part of a series of criminal proceedings against the former leader, who faces decades in prison.

The death sentence of Melissa Lucio in Texas has been suspended. Convicted of killing her 2-year-old daughter in 2007, the woman has always maintained her innocence. The prosecution claims that the child would have been hit by her mother, while for the defense the child would have died as a result of internal injuries sustained two days after an accidental fall.

It has been granted by Jair Bolsonaro, the pardon to the deputy Daniel Silveira, ally of the president. The federal deputy had been sentenced to about 9 years in prison by the Stf (Supreme Court). The accusation was of anti-democratic acts and threats to magistrates. The extinction of the sentence granted by Bolsonaro, in addition to numerous criticisms from the opposition, brought to the table further tensions between the executive and judicial power. The Brazilian president has communicated that his decision is intended to defend “freedom of expression”. Silveira’s sentence, in addition to the prison term, included the loss of the deputy’s mandate and ineligibility for the October elections.