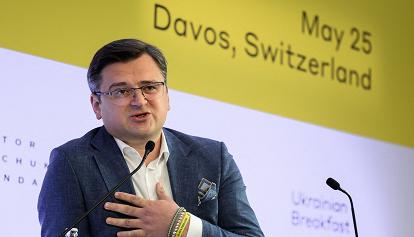 Von der Leyen: “There will be no agreement on oil at the EU summit”

“I do not expect that there will be an agreement on the oil embargo at the European summit next week, it is useless to give false expectations,” says EU Commission President Ursula von der Leyen. There are currently discussions on the aid to be given to Hungary regarding investments and the main technical difficulties.

There is also a focus on  the problem of landlocked countries in need of alternative supplies via pipelines and both on related investments to increase supply and regarding refinery upgrades and renewable energy investments.

The Spanish premier, Pedro Sanchez, announced in the Parliament the intention of the government to make reforms to the laws on the management of confidential State information and reform of the mechanisms of control over the work of the intelligence services.

The speech was focused on the ‘Caso-Pegasus’, an alleged espionage operation to Catalan independence figures. What happened caused strong discontent among Sánchez’s secessionist parliamentary associates, who also threatened to withdraw support for the government.

The independent report about the scandal Partygate, edited by the high official Sue Gray and published in full-form, points the finger at the British establishment, both to policymakers and officials as responsible for a widespread mentality in institutions.

“Ukraine needs a Marshall plan for reconstruction”. This is the purpose of the Italian premier Mario Draghi expressed while he was retiring the politician of the year award at the Atlantic Council of Washington.

It is necessary to continue supporting Ukranians and sanctioning Russia, but always acting with the aim of cease firing – says the premier.

The Ukraine need of aid is tangible, Ukraine needs a financial aid like the Marshall plan with the purpose of helping and making the Country reborn and guaranteeing a stable, strong and vibrant democracy.

A small boat capsized causing the drowning of four migrants and the loss of the tracks of three others “near Mellitah beach,” then on Libya’s west coast. The news comes from the General Staff of the Libyan Naval Forces, pointing out that despite the shipwreck, a Libyan Coast Guard patrol boat managed to rescue 13 people and that in nine operations carried out off Libya, coastguards in a single day managed to rescue 500 people.

The kidnapping of three Italians in Mali has been confirmed by Farnesina. In agreement with family members, Foreign Ministry affirms the need to maintain strict confidentiality.

Lira loses value and the power plant shuts down

Lebanon, which is experiencing the worst financial crisis in its history, is beginning to show signs of the expected deterioration of the socio-economic situation. The local lira has broken a new negative record against the U.S. dollar ($1 = 33.000 lira). One of the two main power plants, the one in Deir Ammar, stopped operating today due to lack of fuel. Operators of gas cylinder filling stations are keeping plants inactive to put pressure on the government as part of negotiations on subsidies to the industry. Pharmacies are already on strike, and starting Friday, private hospitals – which have over time replaced public ones – will also strike, guaranteeing only urgent operations and dialysis sessions, but only to those who can still afford health insurance or who can be considered wealthy.

On the occasion of the ‘March of Flags’ organized by Jewish nationalists, at least 3,000 officers will be assigned to protect public order. After Hamas and other Palestinian factions have threatened that they will try to prevent it at all costs, and after what happened last year, there are also fears that Hamas may fire rockets toward Jerusalem from Gaza.

“There will be no prisoner exchange,” Djalali researcher to be hanged

Iranian-Swedish researcher Ahmadreza Djalali -arrested in 2016, while in Iran at the invitation of Tehran and Shiraz University, on charges of espionage on behalf of Israeli intelligence services -will certainly be executed by hanging, despite numerous international appeals in  support  of Djalali.  This was stated today by judiciary spokesman Massoud Setayeshi. Setayeshi also excluded the possibility –  because of his dual Iranian and Swedish nationality – of trading Djalali for an Iranian detainee, Hamid Nouri, recently prosecuted in Sweden for his involvement in the mass execution of dissidents in the 1980s in Iranian prisons.

Some of the data released by Amnesty International reports that in 2021 there was a new spike in death penalty executions around the world after a year of sharp slowdown due to restrictions against Covid. The total amount is 579 in 18 countries and 314 of which took place in Iran, From this data are excluded unknown convictions from countries that keep executioner activity under wraps, including China, North Korea and Vietnam.

Following the recent collusion activities between the United States and Taiwan, China has organized “multi-service combat readiness” patrols and “real combat exercises” in the sea and airspace around Taiwan. People’s Liberation Army Eastern Command spokesman, Shi Yi, attacked President Joe Biden’s words on U.S. intervention in defense of the island in case of a Chinese attack (later corrected), saying that “it is hypocritical and futile for the U.S. to say one thing and do another about Taiwan, and to encourage Taiwan independence forces.”

The draft law on abolishing the 40-year limit for those who wants to enlist in the armed forces has been approved by the Russian Parliament. The document, for it to become law, lacks only the signature of President Vladimir Putin.

The victims are 19 children and two teachers who have been killed in cold blood by Salvador Ramos, an 18-year-old boy with no criminal record.  There have been over 200 mass shootings since the beginning of the year, and this tragic event lengthens the streak of gun-related massacres in the United States. President Biden responds aggrieved, “tired and angry,” calling for action on guns: “we can and must do more.”

The First Chamber of Brazil’s Federal Supreme Court (Stf) has confirmed the authorization for the extradition to Italy of  Rocco Morabito, a ‘Ndrangheta drug trafficker who is  considered one of the world’s most wanted criminals. Morabito had been arrested in May last year by the Federal Police in João Pessoa and then transferred to the Federal Penitentiary in Brasilia, where he has been held ever since.

Assault at a hotel and 2 bars in Guanajuato: 11 deaths

An armed commando of about 15 people last night raided two bars and a hotel in Celaya, in the Mexican state of Guanajuato. The attacks occurred after 10 p.m. local time in the city’s Valle Hermoso neighborhood, and, according to police sources,. the victims are at least 11 and the wounded are five others, the majority of whom are women.