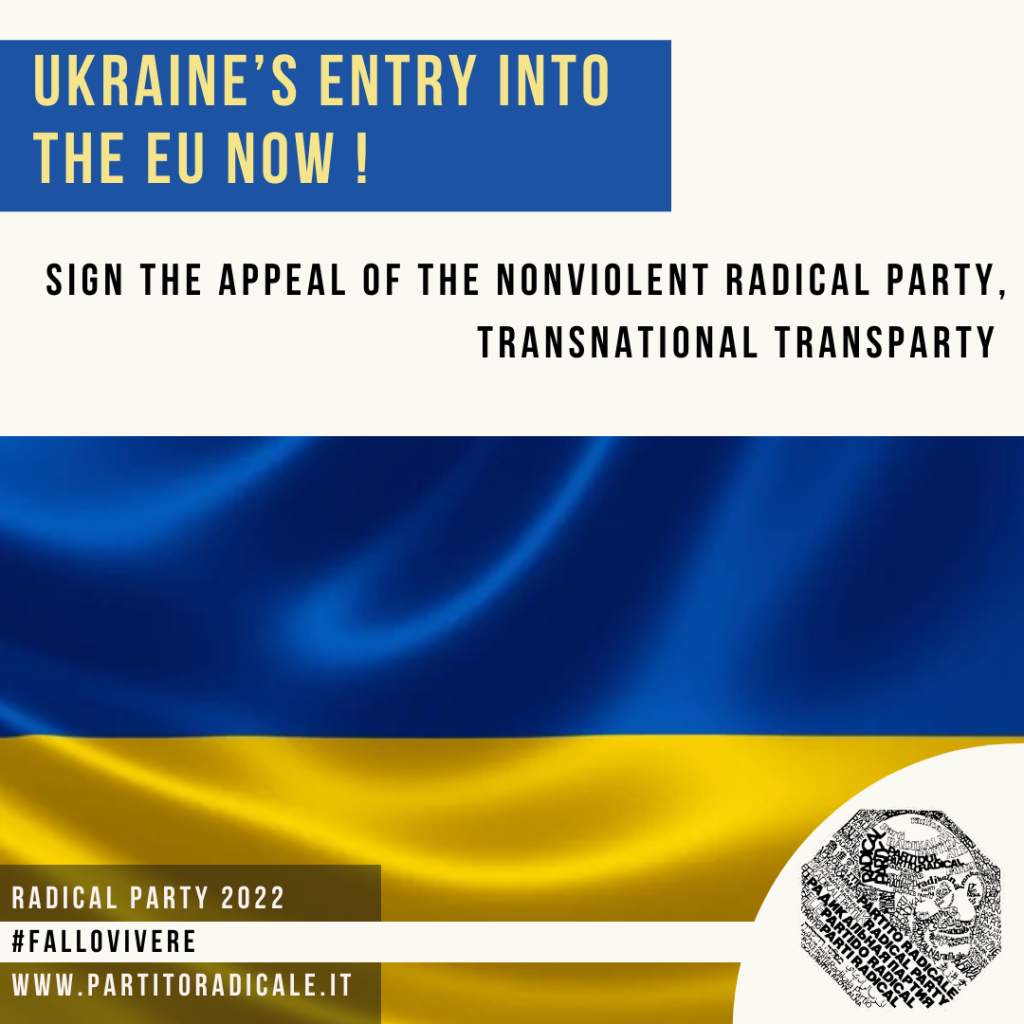 To the President of the European Council, Charles Michel

To the President of the European Commission, Ursula von der Leyen

To the High Representative of the Union for Foreign Affairs and Security Policy, Joseph Borrell

The tragedy of the indiscriminate bombing of civilian homes in ukranian cities is underway: from Spetsnaz to Kharkiv, from Ivano-Frankovsk to Mariupol, from Odessa to Kiev, now besieged by Russian forces.

One hundred thousand people are already displaced and fleeing the country. Huge waves of refugees are anticipated throughout Europe. According to some estimates, they will be 5 million.

The population no longer knows where to hide and many have taken refuge even in subway wagons.

The war of propaganda is flanking the war of arms and the world watches in disbelief as the post-Cold War world order collapses, together with the security system in Europe and its international institutions. This is a well-known goal of Moscow, which disdains the liberal order. Russia aims at redesigning the post-Soviet world order to regain its lost role of great power on the world stage, crushing sovereign countries. Putin has been launching for years, and in recent months with an impressive “crescendo”, an extreme propagandistic ideologization of his ultimate demands against the Atlantic Alliance and the European Union: with disinformation, activities of destabilization and political influence aimed at all the most important and recent electoral consultations and referenda (like Brexit), which could weaken the institutions and the pillars of our democracies.

By wiping out every agreement, every convention and international treaty, Moscow is highlighting the irrelevance of the United Nations, established after World War II, and its Security Council, which is systematically blocked by the vetoes of Russia and China when it comes to issues deemed “sensitive” for their respective totalitarian regimes.

Even in this case, the UN has shown a chronic and structural inability to deal with crises, limiting itself simply to formal and unrealistic appeals.
The European Union does not yet have a common security and defense system.

Even NATO appears hesitant to deploy an adequate defense system on its eastern flank in a timely manner to protect its member states.

The hesitations of NATO countries, of Brussels and the UN, are representative of the impotence of the West towards those who make waste paper of every principle, rule and international treaty with the force of arms.

After the dissolution of the USSR, on December 26, 1991, NATO and the EU, could only respond positively to the continuous requests of democratically elected governments that were anxious to consolidate, at last, their free institutions and societies and to guarantee their own security after decades of “limited sovereignty” because of the Union. However, by encompassing some Eastern European countries, NATO and the EU had ended up creating a security dilemma for Ukraine, Belarus and Moldova. By being kept out, these countries found themselves in no man’s land with an uninterested Europe on one side and Russia reaching out on the other side.

Therefore, in their foreign policy they were forced to look both to the West and to the East.

After the “Euromaidan” revolution, in 2014 Ukraine was invaded by Russia, which had effectively annexed Crimea and supported pro-Russian independence rebels in the Donbas.

Belarus, with Lukashenko, turned eastward, after having quelled the pro-European demonstrations of 2021.

Nevertheless, in Ukraine the pro-European dream was not extinguished. Until the day before the invasion, demonstrations were held weekly for the freedom and independence of the country and for their desire for Europe.
Kiev sees its salvation exclusively within NATO and the European Union. This was reiterated by President Volodymyr Zelenskyy and former presidents Viktor Juščenko and Petro Porošenko, who had signed the Association Agreement between the European Union and Ukraine on June 27, 2014.

The former Soviet country’s accession to the European Union has therefore always been considered a fundamental goal to be achieved by Ukraine’s leading politicians. At the same time, any rapprochement with Europe was hindered by pro-Russian politicians, such as former President Viktor Janukovyč.

According to a poll by the Ukrainian Rating Group institute, published on February 17, 2022, 68% of Ukrainians support EU membership.

In February 2019, Verkhovna Rada, Ukraine’s unicameral parliament, had included in the Constitution the path to NATO and EU membership.

A decidedly pro-European charter that in its preamble refers to the “european identity of ukrainian people characterizing as irreversible the euroatlantic path of the country” and in art. 102 it amplifies the powers of the head of state, who assumes the role of “guarantor” of the implementation of the country’s strategic path to acquire full membership in the European Union and the North Atlantic Treaty Organization.

Ukraine was preparing to submit an official application for EU membership in 2024, with the goal of joining in 2030.

It is within this framework of strong pro-European impetus that the popular demonstrations of Euromaidan should be framed. They began on the night of November 21, 2013 in Kiev, which was already the scene of the Orange Revolution in 2004, against President Viktor Janukovyč. He had refused to sign the association agreement of Ukraine with the European Union, because of the pressure of Moscow. Russia had offered, in exchange for waiving the signature, a substantial loan in government bonds worth 15 billion dollars, tying the two countries even more.

Janukovyč was accused by his parliament and fled to Russia. Before that, more than a hundred protesters were slaughtered, many of them wrapped in the Union flag, when the president gave the order to evacuate Independence Square in Kiev through force.

This criminal aggression, prearranged long before and carried out with constant falsity and deception by President Putin, requires an immediate, strong and demanding decision by Europe: Ukraine must be granted, immediately, the “status of candidate country for the accession to the European Union” with all the prerogatives that this entails for the legitimate Government and legitimate democratic institutions that currently lead the country.

This is a valuable political contribution that Europe can provide in these hours for the citizens of a country where the Europeanist fire is always burning; even in a country partly amputated of territory by the Russian invader.

A joint statement by the presidents of Poland, Slovenia and Lithuania states that Ukraine deserves the status of candidate country to the EU.

Ukrainian President Volodymyr Zelenskyy and his Polish and Lithuanian counterparts, Andrzej Duda and Gitanas Nauseda, met in Kiev on Wednesday, February 23, to discuss the crisis and reaffirm their solidarity.

The joint statement reads: “Given the significant progress in the implementation of the Association Agreement and internal reforms, as well as the current security challenges, Ukraine deserves EU candidate status and Lithuania and Poland will support it on its way to achieve this goal.”

Enlargement is the most powerful foreign policy tool that the EU has. Recent history proves this.

The EU offered a prospect of membership to the Western Balkan countries in May 1999, at the height of the Kosovo war.

It seemed crazy, but since then, Europe has entered the agenda of the Western Balkans and, although it was too hesitant to let them in through the door, it remained a model and a reference.

No European country is more determined than Ukraine in approaching the Union, but it was stopped before being admitted to the accession process because of the short-sightedness of our political leaders. They were too busy putting their own narrow electoral interests first.

We, therefore, believe that the time has come to officially recognize the status of Ukraine as a candidate country to the European Union and activate the accession process of a country that has paid dearly for its thirst for freedom and its strong Europeanist aspiration.

We believe that this is a strong signal of an open and inclusive European Union, a fundamental reference of values and human rights that as such are universal: the natural right, historically acquired, of each individual to freedom, democracy and an international order based on peace and the rule of law.

We call for an urgent convocation of the European Council. On the agenda: the path for Ukraine’s accession to the EU, so that it can promptly adapt its internal order to the communitary acquis by implementing all the necessary reforms, especially in the field of justice and the fight against corruption, to strengthen the rule of law.

The European Union has the urgence and need to assume the role of power, and above all a political one by equipping itself with a security and defense system worthy of a great democratic state with its economic and cultural strength of absolute value.

We ask that the European Council urgently puts  the construction of a solid architecture of security and common defense on its agenda. This is to honor the founding fathers Spinelli, De Gasperi, Monnet, Schuman and Adenauer. Otherwise, their dream will vanish at the dawn of a sad awakening.