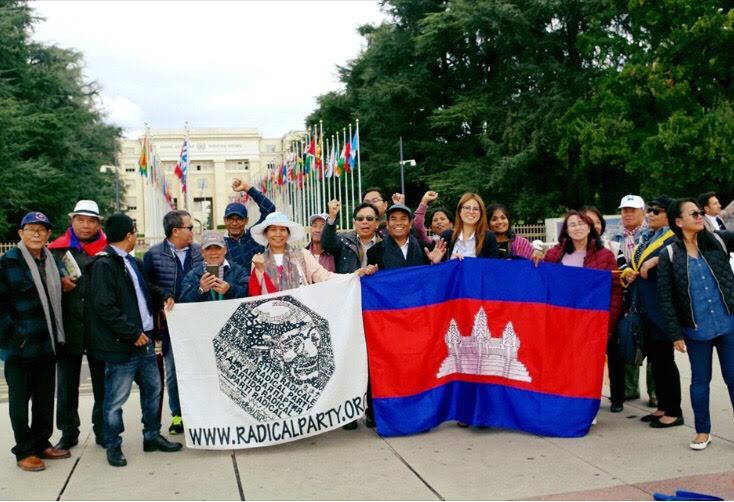 Thursday 26 September at the General Debate of the UN Human Rights Council in Geneva on country reports of Cambodia, Georgia and Yemen, Phirith Run, member of the Nonviolent Radical Party, took the floor for an oral statement on the human rights situation in Cambodia. The video-footage of the session is available here. Mr. Run speech is N. 86.

At the beginning of this session, the High Commissioner Michelle Bachelet alerted the Council that in human rights conditions in Cambodia continue to deteriorate daily. She presented a clear picture of the ongoing repression, breaching the Cambodian constitution and international treaties like the Paris Peace Accord. She stated that “this year, police or the courts have questioned over 130 people, and at least 22 opposition members or supporters are currently in detention, on a range of criminal charges or convictions either directly or indirectly related to their political opinion”.

These are not just numbers but government-caused human tragedies that have names, like Kem Sokha, Kong Mas, Parn Soksovanny, and Sou Yean, joined in the last days by Yu Chantheany, Ly Mengkheang, Ly Lin, Chhun Thaiyuth. Hundreds of others, in fear of arrest, are in hiding within Cambodia or have fled to Thailand and beyond.

The Cambodian Deputy Prime Minister has ordered the authorities to closely monitor all pagodas accusing villagers identified as opposition members of conducting unlawful meeting during the two-week Buddhist ceremony of Pchum Beun. Thousands are under strict surveillance. Those harassed, detained and charged have called for the release of Kem Sokha, CNRP’s president, unconstitutionally detained for over two years now; they support the return from exile of CNRP acting president Sam Rainsy on 9th of November.

All these threats, false accusations and serial arrests are gross violations of human rights that this Council must condemn. They cause far-reaching consequences beyond fear, as families are separated, children stop going to school, and farms are left unattended. Besides, the looming suspension of trade preferences caused by the disrespect of Human Rights will further worsen the situation.

We ask this Council to apply maximum pressure on the government to immediately abandon its oppressive policies. This Council must act and do its utmost to guarantee that all detainees and political prisoners are immediately released and that the announced return of the exiled opposition leaders in November is turned into an opportunity to return to dialogue, reconciliation, free and fair elections, and prosperity for all Cambodians.