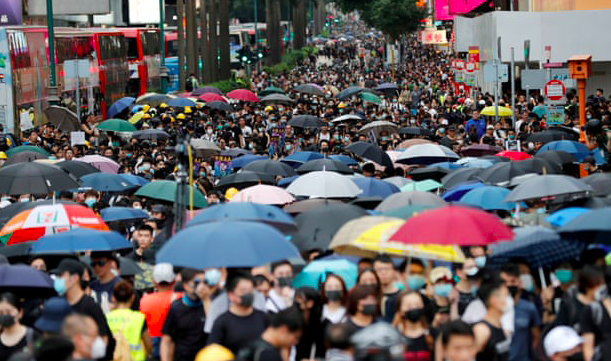 On Friday, the 18th successive weekend of protests has begun in Hong Kong, in open defiance of the emergency regulation that has just entered into force. Thousands of people took to the streets for a night of violent protests, with crowds setting fire to two subway stations, and vandalising shops and companies considered to be pro-China. The police responded once again with tear gas and in at least one case with firearms. This latest clash comes at the end of a week in which two significant, and radically opposed, historical dates have been “celebrated”: the 70th anniversary of the founding of the People’s Republic of China on October 1st, and the International Day of Nonviolence on Mahatma Gandhi’s birthday on October 2nd.  Unfortunately, the way in which these two dates were (not) remembered in most of the political world is emblematic of the decline in the defense of the rule of law, democracy and human rights around the world.

On Tuesday, China celebrated the 70-year rule of the Communist Party and its rise to global superpower status with a military parade of 15,000 troops and weapons including new hypersonic drones and intercontinental ballistic missiles, under the eyes of the country’s leadership in Tiananmen Square.Xi Jinping, President for life and possibly the most influential leader since Mao himself, launched the celebrations with a speech highlighting the economic rise of China and role of the Party in promoting it: “There is no force that can shake the status of this great nation. No force can prevent the Chinese people and the Chinese nation from advancing.”

For the Communist Party, this was a most important celebration, as it did not only survive the Soviet Union that was once its sponsor and supporter, but they have now largely surpassed it, with the success of Xi’s aggressive projection of power beyond China’s borders and the clear and openly declared goal of changing the world to adapt it to its purposes rather that adapting to the world.

All this is all too evident during the sessions of the United Nations Human Rights Council in Geneva, where China has more than once openly declared its intentions to rewrite the rules, reaffirming the principle of non-interference in internal affairs and launching the concept of “human rights with Chinese characteristics”, against the universality of human rights on which the United Nations are based. Numerous NGOs, anonymous UN officials, and some (too few) Member States have repeatedly denounced the aggressive pressure of the PRC – supported by an ever-increasing number of similar regimes and vassal states – on international mechanisms for the defense of human rights and the rule of law. Certainly, the impossibility of condemning the PRC for its mass arbitrary detention of at least 1 million Uyghurs during the penultimate session of the Council is the most striking example, compounded by the letter signed by 37 ambassadors, mainly from Africa and the Middle East (including Pakistan, Saudi Arabia, Algeria and Russia), to the President of the Council and to the High Commissioner for Human Rights, in which they praise the development of human rights in the Xinjiang Autonomous Region and the success of China’s anti-terrorism and de-radicalization policies, in response to the letter from 22 countries (almost all Western) asking for an independent inquiry into the policies implemented in the Region.

But we have witnesses it also during the latest session, which ended on September 27th, when Hong Kong legislator and democracy activist Tanya Chan took the floor on behalf of UN Watch, launching an appeal for action in the face of police brutality in Hong Kong, only to be reprimanded by the official presiding the debate. Chan urged High Commissioner Bachelet to support the organization of an urgent session of the HRC on the situation in Hong Kong and the establishment of a commission of inquiry, concluding her speech in no uncertain terms: “Why is China sitting here as a member of the Human Rights Council?” Instead of offering the usual thanks and moving on to the next speaker, Argentina’s ambassador Foradori said the statement was not within the parameters of the order of the day (which was Point 3: “Promotion and protection of all human, civil, political, economic, social and cultural rights, including the right to development”).

But obviously this projection of power is not limited to the soft power play of rewriting the rules. On Thursday, Russian President Vladimir Putin, who last June Xi Jinping called his “best and bossom friend”, said that Moscow is helping Beijing build a ballistic missile warning system. Since the Cold War, only the United States and Russia have such systems, which invlove a series of terrestrial radars and space satellites, allowing the timely detection of intercontinental ballistic missiles. Speaking during an international affairs conference, Putin stated that Russia is helping China develop such a system, adding that “this is a very serious thing, which will radically improve China’s defense capability”. His statement indicates the intensification of defense cooperation between the two former communist rivals who are developing ever closer political and military ties.

In this scenario of increasingly open challenge to the world order built after the end of the Second World War, and in the hope that this order could be fully affirmed after the collapse of the Soviet Empire in the 90s – hopes that led to the opening to China and its consequent economic ascent, often in flagrant violation of international (trade) rules -, today the democratic world remains too silent and fails to unite. While in many parts of the Western world, civil society organizations were organized on October 1st, uniting Chinese, Tibetan, Uyghur, Taiwanese and Hong Kong citizens under the banner of anti-authoritarianism, President Trump and other Western government leaders sent the usual well-wishes for the national holiday to Beijing.

As we know all too well in Italy, the European front is more divided than ever on the Chinese question (threat), as highlighted by the strategy paper on China issued by the Swedish government on Wednesday October 3, citing Stockholm’s concerns about the Beijing-Moscow ties, and urging the European Union to adopt a “common and clear” position to “manage the challenges” posed by China’s geopolitical ambitions in Europe. The Swedish strategic document “calls for cooperation between the EU and the United States to meet the security challenges arising from the global rise of China”.  The growing ties between China and Sweden’s powerful neighbour Russia is raising serious concerns among Stockholm politicians: “Their relationship is based on a common interest in changing the international system to the benefit of both countries.” Moreover, the proliferation of Chinese investments in Europe is forcing Sweden, a traditional supporter of free trade, to consider a national investment control mechanism.

The document also draws attention to China’s efforts to achieve “greater influence over the Arctic”. Last year, China began to extend its huge infrastructure project, the Belt and Road Initiative, developing shipping routes to the far North, opened up in the polar region by global warming.

In dubbing the proposed new routes the “Polar Silk Road”, China said it would encourage companies to build infrastructure and conduct commercial test trips along the Arctic sea routes. While stressing that Sweden will adapt to the EU on a common strategy on China, the strategy paper indirectly blames the block for failing to come up with a comprehensive plan to manage the world’s second largest economy. “It is crucial for Sweden that the EU conduct a common and clear policy on China”, adding that the EU should explain how this policy could be applied individually by each Member State.

In all this, with an increasingly open clash on the rules and the world order of tomorrow, it is clear that the free world should take a much stronger position regarding Hong Kong if, in potentially losing this battle, it does not want to lose its moral authority, the attraction of the human rights system and the rule of law for oppressed citizens around the world, as well as the use of the weapon of nonviolence by the oppressed, a weapon that risks abandonment if not supported. In fact, after months of mostly peaceful protests, acts of violence on both sides have become more frequent, as seen Friday night after the adoption of the emergency regulation.

The emergency regulation order, created by the British authorities to break port strikes in 1922, had not been used for more than half a century and never since the passage of Hong Kong to Chinese rule in 1997. Invoked by the executive, bypassing Parliament (which will still be called to express itself on the measure upon its reopening), it provides practically unlimited powers to Chief Executive Carrie Lam, although legal scholars claim the government could be challenged in court if a provision violated the Basic Law of the Territory. The regulation came into effect at midnight on Friday and excludes all facial coverings, including paint and anti-gas masks, at any public meeting, under penalty of a fine and up to a year in prison. During a press conference, a combative Lam stated: “We have a duty to use all available means to stop the growing violence and restore calm in society. The decision to invoke the emergeny regulation is difficult, but also necessary for the public interest.” After Friday’s violent night, smaller demonstrations have continued on Saturday, October 5th, with protesters with covered faces overtly challenging the emergency regulation, without the police trying to impose the order for now. A large demonstration, for which no authorization was requested, is scheduled for Sunday.

As Friday’s acts of vandalism show, the Hong Kong battle for democracy – universal suffrage, direct elections, civil rights, freedom of expression and respect for the rule of law – is on the brink. This is not due to the fact that the hundreds of thousands of protesters that have come out since June have suddenly changed their minds about Beijing’s devious efforts to widen its control over the Territory of on the method to be used, but – at least in part – to a lack of unified and strong support from the world whose model they so staunchly seek to defend.

The statements in support were too scattered and for the most part issued by Parliamentary institutions (for which they should be praised); in particular the bipartisan law in under discussion in the US Congress, as well as declarations of the European Parliament and interrogations and motions presented also in the Italian Parliament. However, the executive branches have not shown the same determination. As the legal guarantor of Hong Kong’s freedoms, Britain has a duty to resist China’s repressive behavior. But apart from some carefully formulated diplomatic phrases, it has failed significantly to address the matter. Such weakness is rejected with contempt in Beijing. In the United States, considered a global champion of democratic values, the White House has not taken substantial action, applying punitive measures to China for its unfair commercial practices, but not for its human rights violations.

It is clear that in Washington, London, Roma, and other Western capitals, money and hard power continue to speak louder than democratic ideals, broken umbrellas and blood-stained shirts. It is clear that the reason of state, despite all statements, has not been overcome. However, it is not to be forgotten that it is also the violation of these fundamental principles that allows China to put its unfair commercial practices into practice. If the cause of democracy, human rights, the rule of law and nonviolence in Hong Kong will be lost, it will at least in part be because the West failed to fight for it. And these are precisely the reasons why the Nonviolent Radical Party must continue to do so.