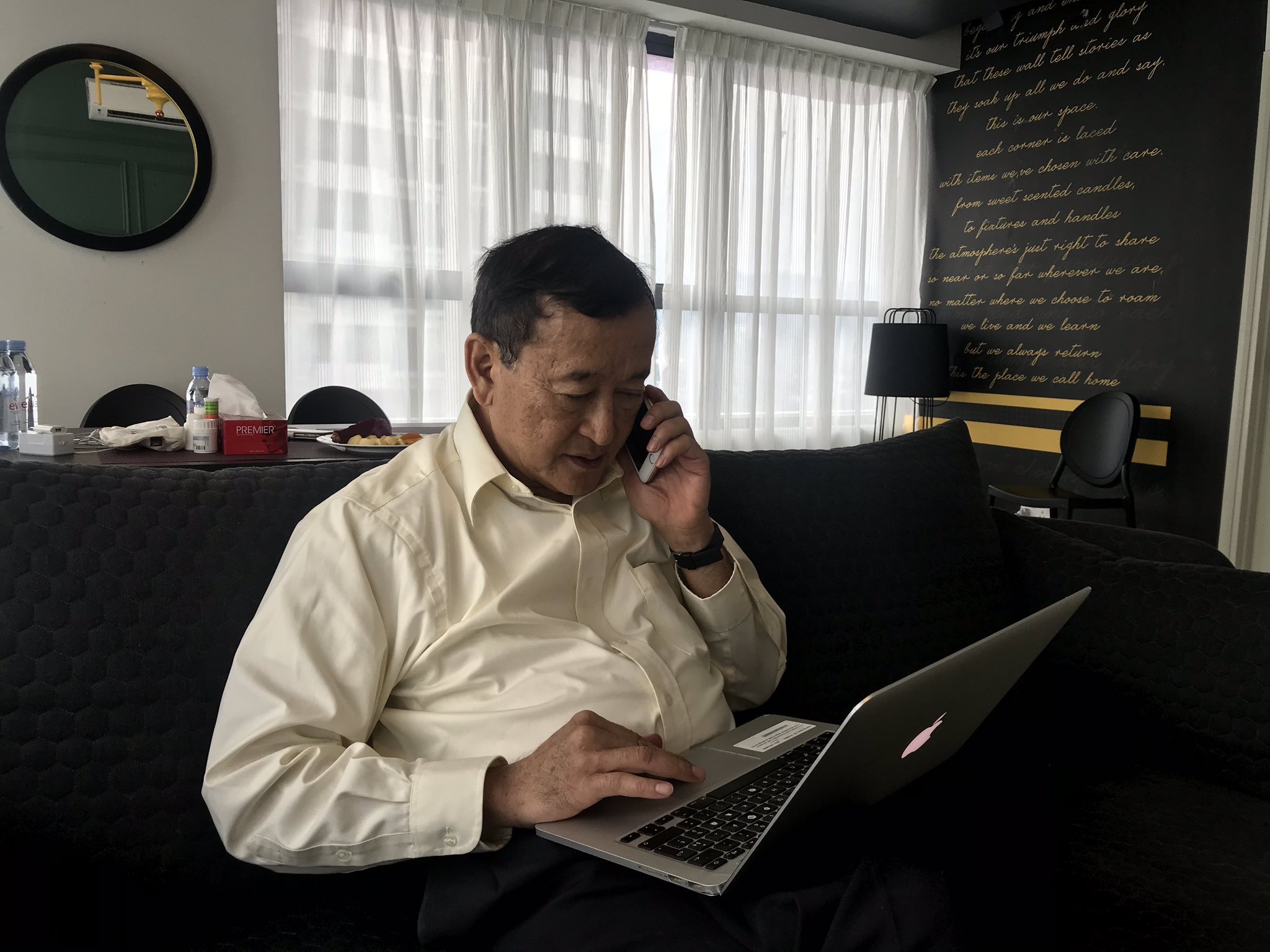 Francesco Radicioni: Radio Radicale. Since August of this year Sam Rainsy, leader of the Cambodian democratic opposition and honorary president of the Nonviolent Radical Party, announced his return to Cambodia on November 9th, after 4 years of exile in France. While Hun Sen’s government – the man in power in Phnom Penh since 1985 – is doing everything to prevent Sam Rainsy from returning to the Southeast Asian country, yesterday the opposition leader arrived in the capital of Malaysia.

Sam Rainsy, you have now arrived in Kuala Lumpur: so close to Camb odia, although there is no common border between Malaysia and Cambodia. At this point, what is your plan?

Sam Rainsy: My plan is the same. The big plan is to restore democracy in Cambodia. And the smaller plan is for the opposition leaders to go back to Cambodia. To go back physically. So, we will manage to do so in the near future.

FR: Yesterday, Hun Sen’s government said you and other leaders may now return to the country, even if the prospect is to be arrested. Today, a court in Phnom Penh released Kem Sokha – another important opposition member – from house arrest. He may now travel within Cambodia, although he is not allowed to leave the country or be involved in politics. What do these latest developments mean?

SR: Hun Sen does not say the same thing all the time. He changes. If he does not change, it is one of his Ministers that say something different. So, we don’t know what they want, and maybe they want to confuse us. So we wait for them to be clear. They say that I can go back now. But they have to lift the prohibition, to cancel the prohibition to airline companies to carry me. Because they cannot say just like that “you can come; you cannot come”. They have to be consistent and make official decisions to the official authorities, to the official airline companies, etc., so that it is really clear. This is the first point. Secondly, what we want is the restoration of democracy in Cambodia. It is to solve Cambodia’s political crisis. And this crisis has been worsening. So it is not the problem of Kem Sokha as a person. It is not the problem of Sam Rainsy as a person. It is a problem for the Cambodian people: to recover our freedom, for democracy to be restored. Yes, we need leaders: Kem Sokha, Sam Rainsy. But it is not enough. This is just one point, one element in a big picture. So, the big picture: we must ensure that Hun Sen really wants restoration of democracy. Not to confuse the world. Not to confuse the European Union. To confuse and to fool… he thinks that he can fool the international comunity by giving something very little, solving a problem that he has created. This is his tactics. His tactics before the negotiations, he creates problems. He creates 100 problems. And then he solves one problem, two problems, three problems… but what about the 99, 98, 97 problems? So it is just a bargaining chip: to release Kem Sokha from house arrest… It is a partial release, it is not a real release because Kem Sokha cannot leave the country; Kem Sokha cannot do political activities; Kem Sokha cannot meet me… But it is a small gesture, and he hopes that the international comunity will be happy, especially the European Union in that it would maintain the EBA system of trade privileges. So, coming to my return, it is but one element. Kem Sokha’s release, one element. But we need a big picture, to see the big picture: what are the general concessions on many other points that Hun Sen must make, that Hun Sen must promise, to which he must commit himself? To give in on much more than the small things. We talk about the freedom of press. We talk about the freedom of the trade unions. Unionist trade leaders must also have their freedom. Trade unions must be allowed to organize and to mobilize workers, to ask for better salaries, better living conditions… So, these are their rights, because also the trade unions want all these problems to be resolved. Not only a piecemeal approach of just Kem Sokha, just Sam Rainsy… It is not enough.

FR: What do you think is Hun Sen’s strategy now? In recent days, there have been dozens of arrests of opposition figures in Cambodia, we have seen pictures of the police and army ath the Poipet border post and near Phnom Penh airport. Hun Sen’s attitude seems rather paranoid…

SR: It shows that Hun Sen is very afraid. He is panicking. And he is becoming very inconsistent. Over the last few months, he has threatened me: “don’t come, don’t come!”. “If you come, I will arrest you. I will destroy you.” When I respond: “Ok, never mind, I come”, then he tells the airline companies not to carry Sam Rainsy into Cambodia. So, very inconsistent. It is crazy. This means that first of all, he is very afraid. And secondly, he wants to stay in power. At any cost. Using all the violence, all possible threats. He arrested dozens of my supporters, dozens of activists. And he has summoned his court, his kangaroo court, to put many people on black lists, to threaten them. And he also threatened, because he knows that I use Facebook a lot… I don’t have television, I have only Facebook, I don’t have a radio like the Radical Party which is very popular, but so, I have no radio, no television. In Cambodia, there are 30 television stations, all controlled by the ruling party. So my only outlet, my only means of comunication is Facebook. I have nearly five million followers. So when I say something, people know and people think about the opinions and the ideas that I gave. So Hun Sen threatened that whoever likes my page, may go to jail. Whoever shares any post of mine, jail. Again, this means he is very afraid. So, what we are doing is leading a civil disobedience. He said: “no likes, no shares of Sam Rainsy’s Facebook page”. I ask people likes and shares. Because this is not a crime! Nowhere in the world clicking like or clicking share is a crime. And there are so many people among my five million followers, suppose only ten percent, meaning 500.000 people who like and share. He cannot put 500.000 people in jail, there is no jail big enough to accomodate for half a million, half a million! So this is a peaceful campaign. A peaceful campaign, showing that we are peaceful, that we are nonviolent, but that the order from Hun Sen is unacceptable. You cannot prevent people from liking, from loving, from believing. You can order the body not to do anything; you can cut my hand not to do something; you can cut my feet not to go anywhere; but you cannot kill my spirit! If I believe in something, in somebody, this is my last freedom! In my head. In my heart. If you want to suppress the last freedom of a human being, not allow it to think, not allow it to like or to love, not allow it to believe… It is like the beginning of christianity. How can you stop people from believing? It is the same. And now Hun Sen must understand he cannot forbid people from believing. And I want the people who support my party to like and share, to like and share. To show that you believe is not a crime! You have not done anything wrong! It is what is in your head, what is in your heart, it is not a crime, so do it! If Hun Sen arrests us, at least half a million people, it will be the end of Hun Sen’s regime.

FR: When this summer you announced you wanted to return to Cambodia on November 9th, you said you were inspired by People Power: the movement in the Philippines in the mid-1980s which led to the fall of Ferdinand Marcos’s regime and the restoration of democracy in Manila. Instead, when you landed in Malaysia yesterday, you said democracy has won here after the historic success of the opposition in last year’s elections – for the first time since 1957. Do you think there is a model for promoting democracy here in Southeast Asia?

SR: Yes, the Cambodian people admire Malaysia. Because Malaysia has shown that it is possible to put an end to a dictatorship. To allow different thinking, different opinions to prevail. That there is no eternity. No political party, no leader can enjoy eternity. Therefore, in Malaysia, after the rule of one party, for decades, I think for sixty years… the opposition won. Hun Sen and his party have been in power for “only” forty years. So it would be possible also for the Cambodian people to put an end to dictatorship. It would be possible for the opposition to defeat this rule of one party for so so long. And in Cambodia it is even worse, because during the rule of one party in Malaysia, there were different leaders, different prime ministers. But in Cambodia during that period, only one person, only one prime minister! So it is not only the rule of one party, it is the rule of one man! This is not only a one-party system, it is a one-man system. So it is even more vulnerable, making it even more possible for us to bring about a change, a democratic change!